If you live in south-western Ontario like me, Sleeping Giant Provincial Park is far away -very far. But wait! It is so worth the drive! It is incredibly beautiful, and we have had some of the most amazing wildlife experiences there.

Here are my favourite things to do while camping at Sleeping Giant, in no particular order:

Sleeping Giant has over 100 km of hiking trails for both day, and overnight hikes. We have been on close to 10 of them. The views from the top of the Sleeping Giant are spectacular!

2 – Do an overnight bikepacking trip

We have done 2 bikepacking trips at Sleeping Giant, which I have written about previously. These trips allowed us to get further into the park, since we could cover more distance by bicycle than on foot. We locked our bikes together, and continued on our way, walking to interior campsites on Lake Superior. Both times we were the only people camping in the area. There are 5 trails in the park that allow cycling: 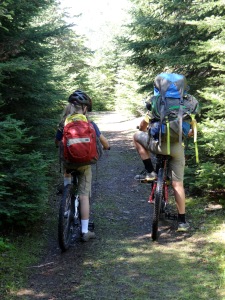 In addition to simply walking around the Visitor Centre and exploring the displays, we have attended scheduled programs, learned lots, and been entertained! We have learned about Silver Islet, an area of the park, been treated to a concert by a singer/songwriter, and taken part in a trivia night.

Several times at dusk we have hopped into our vehicle and driven slowly around the park, looking for creatures of the night! We were lucky enough to see a wolf (our first ever), an owl, a mama deer with two babies, and bunnies, just by driving around. Other times we grabbed our headlamps, and went for a walk at dusk, hoping to spot wildlife. I encountered a bear while running just outside the park one day, and another day, we saw a mama and 3 cubs at the entrance to the park! They were standing on their hind legs eating from the trees. Another day, we spotted a bald eagle just outside the park. I snapped quite a few pictures, one of which was a winner in the park’s annual photo contest!

Just an hour away from Sleeping Giant is Ouimet Canyon Provincial Park, a day use only park featuring arctic plants which are usually found 1,000 km north. According to the park’s website, they survive because of the unique environment at the bottom of the canyon. The website also says that there are “Panoramic views of a 150 metre wide gorge and sheer cliffs that drop 100 metres straight down to the canyon floor”. There is a short trail and boardwalk that allows you to see the canyon from lookout platforms. We brought a picnic lunch and sat at one of the picnic tables near the tiny office, where you can pay for a park permit if you haven’t already paid for day use at another provincial park.

7 – Mine for amethyst nearby

We drove approximately 45 minutes to Amethyst Mine Panorama, where we learned about amethyst mining, got to mine our own, wash it off, and buy a small amount. It was not too expensive, and we had a lot of fun doing it.

The Terry Fox monument is located on Highway 11/17 (Thunder Bay Expressway). Terry Fox was an inspirational Canadian who ran across Canada to raise money for cancer research (the “Marathon of Hope”).

There are trails that hug the Lake Superior Coastline, and many opportunities to explore the beautiful coast! Pack a lunch, lots of water, your binoculars, camera, and curiosity, and head in any direction for an adventure you won’t soon forget!

What are you waiting for? Start planning your camping trip today!