If only I could put down on paper the images I have in my mind! I recently spent a week camping at Lake Superior Provincial Park, and the scenery did not disappoint!

My daughter and I signed up for a 3-hour art class at the Visitor Centre, and while she decided to paint the small black bear that we spotted just south of the park along Highway 17, I chose to paint a coastal scene.

The class was open to all ages (8 and under must have a parent with them), and was instructed by a local artist named Heather Sinnott. There were a total of 10 students in the class, including just 2 kids. Before the class began, a woman asked me, “Do you blog?” She had found my post called “My 10 favourite things to do while camping at Lake Superior Provincial Park” in researching the park, and recognized me! Very neat.

The class began with a slideshow of pictures that Heather had taken in and around Lake Superior Provincial Park, as well as of her artwork.

We were given small pieces of paper, pencils and pencil crayons and told to sketch out whatever it was we wanted to paint. There were all kinds of pictures to look at in case we couldn’t decide what we wanted to draw, or in case we just needed a bit more inspiration. We could also try to paint a photo we had taken ourselves.

When most people were done their sketches, Heather gave us a little lesson on the colour wheel (she had a turtle colour wheel) and how to mix colours. We would be given only the primary colours (red, yellow, blue), white, and 2 others if we wanted them (a violet and a turquoise).

The next step was to sketch our scene onto canvas. I changed my drawing slightly, but just the proportion of beach to water to sky.

Then it was time to play with the paint!

I had fun mixing colours, but some colours were hard to create! I’m not sure when I last painted, let alone mixed colours. And then I ran into the problem of running out of the perfect colour and having to attempt to make more!

Ailish kept asking me what time it was, because she felt that she was going to run out of time.

I wasn’t sure whether to paint the background or foreground first, and decided to tackle the island first, then the trees. But I later realized that I should have done the background, because trying to fill in the white area around the trees was really hard without messing up my tree branches. I had to touch the trees up later, but I think it would have been easier to do the trees last. 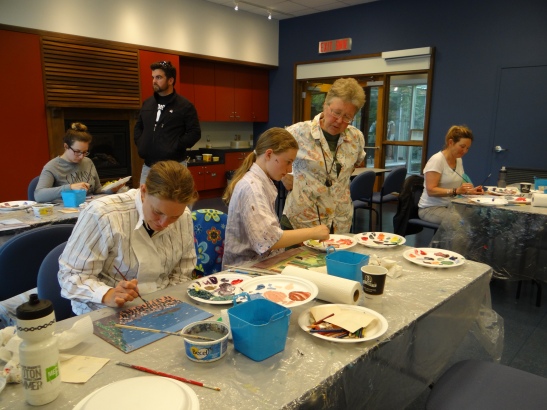 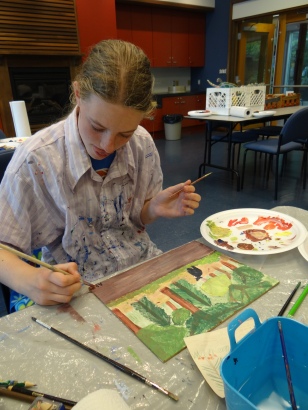 As we got closer to the 3 hour mark, Ailish asked Heather for help. She suggested ways to make the painting go faster.

I wasn’t happy with the colour of my sand, but didn’t have time to start over mixing a sand colour. And my pretty purple flowers on the beach dried very dark, and aren’t really distinguishable from the sand and rocks. I asked Heather how to make my water look more water-like, so she suggested waves, and showed me how to do them. Then I added white caps.

When we were done, everyone else was pretty much gone, except for a woman from Québec City. Heather took Ailish and I outside onto the back deck of the Visitor Centre for the “Trucker’s Test”. She leaned our pictures against a railing, and we stepped back – way back – as if our pictures were billboards. From that vantage point, we could see what jumped out of the painting, and what didn’t. Heather pointed out that all my colours were dark, and that in future I could work on using darker colours and lighter colours. She added some lighter colour to my trees, and to the island and rocks. It really helped. Ailish’s tree behind the bear got a little bit of a touch-up too.

Ailish and I really enjoyed the painting class. I’m happy with my painting, but it’s far from what I was actually going for. Lots of room for improvement! I like Ailish’s painting better, and she prefers mine. That’s probably normal.

I highly recommend art programs at Ontario Parks! I did a fun one last summer at Grundy Lake too. Many parks have “Friends of” organizations, non-profits which organize different events for the parks. Take a look at the other programs organized by the Friends of Lake Superior.

Join 136 other followers
Follow Kyra On The Go on WordPress.com